Pictures of a 4mm scale model railway in P4

To save you clicking to and fro, this is a long single page. On a slow connection it may take a few minutes to download completely.

This is the second Adavoyle model railway, begun in 1983. The first one was started in 1963 before P4 standards had been formalised, and is now in Ireland awaiting restoration. The original aim of Adavoyle, 44 years ago, was to show that the P4 standards, despite their shallow flanges, could be used on a grand scale - and Adavoyle was undoubtedly the first P4 layout on which expresses charged confidently over complex pointwork at mainline speeds. There was nothing sedate about the progress of the Dublin express.

Irish modelling was chosen because a railway of unusual gauge and with little in the way of trade supplies was an interesting challenge. And because the Irish Great Northern, with its sky blue and vermillion locomotives, mahogany coaches and blue and cream diesel stock, offered a catholic choice of prototypes ranging from steam, through railbuses, railcars, horse and electric trams to joint ownership of the County Donegal railway. It was an enterprising and well engineered railway which always had the appeal of an English pre-grouping company - one which had somehow survived well into the 1950s.

The model represents the Great Northern Railway of Ireland as it was 1949. In real life Adavoyle was a lonely blockpost on a mountainous section of the Great Northern main line mid-way between Dublin and Belfast. A large, but entirely imaginary, junction station has been created at Adavoyle, with two equally imaginary GNR branches: one running north-west to Monaghan, and the other south-east to Greenore via a small branch line station at Flurrry Bridge. Greenore was once a LNWR packet port served by the Dundalk, Newry and Greenore Railway, on which aged LNWR-liveried trains survived until closure in 1951.

Adavoyle Junction is also served by a 3ft gauge narrow-gauge railway which, meandering southwards from Bessbrook to Inniskeen (real places), traverses mixed-gauge track and pointwork at Adavoyle. The station at Adavoyle is just inside the border in Northern Ireland. But with four out of the six lines emanating from there crossing into Eire, HM Customs & Excise are much in evidence - and trains are frequently held at Adavoyle to be searched for illicit butter and alcohol! 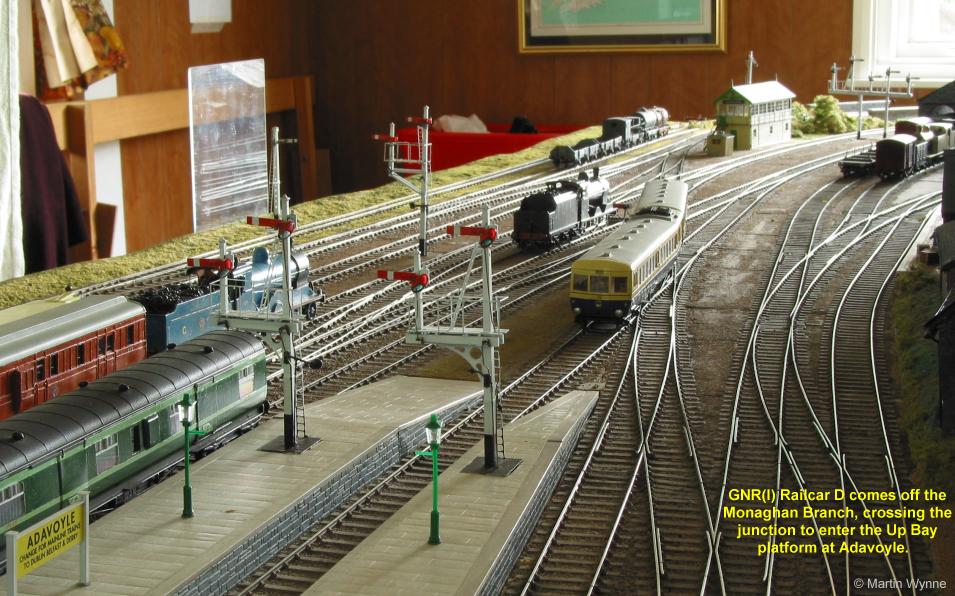 Here are a few links to some more pictures of Adavoyle which have found their way onto the web. Most of them have been taken by visitors at exhibitions:

Civil engineers may have a fit when looking at the bridge in Rod Cameron's picture on the last link, but should look again:

This is based on the famous "Egyptian Arch" near Newry, designed by Sir John McNeill and completed in 1851. It is a proper arch structure, but modified on the face to look "square" in the Egyptian style. It is shown on UK pound coins for 2006. The model was constructed by David Sutton. For some pictures of the real arch, see: Egyptian Arch.